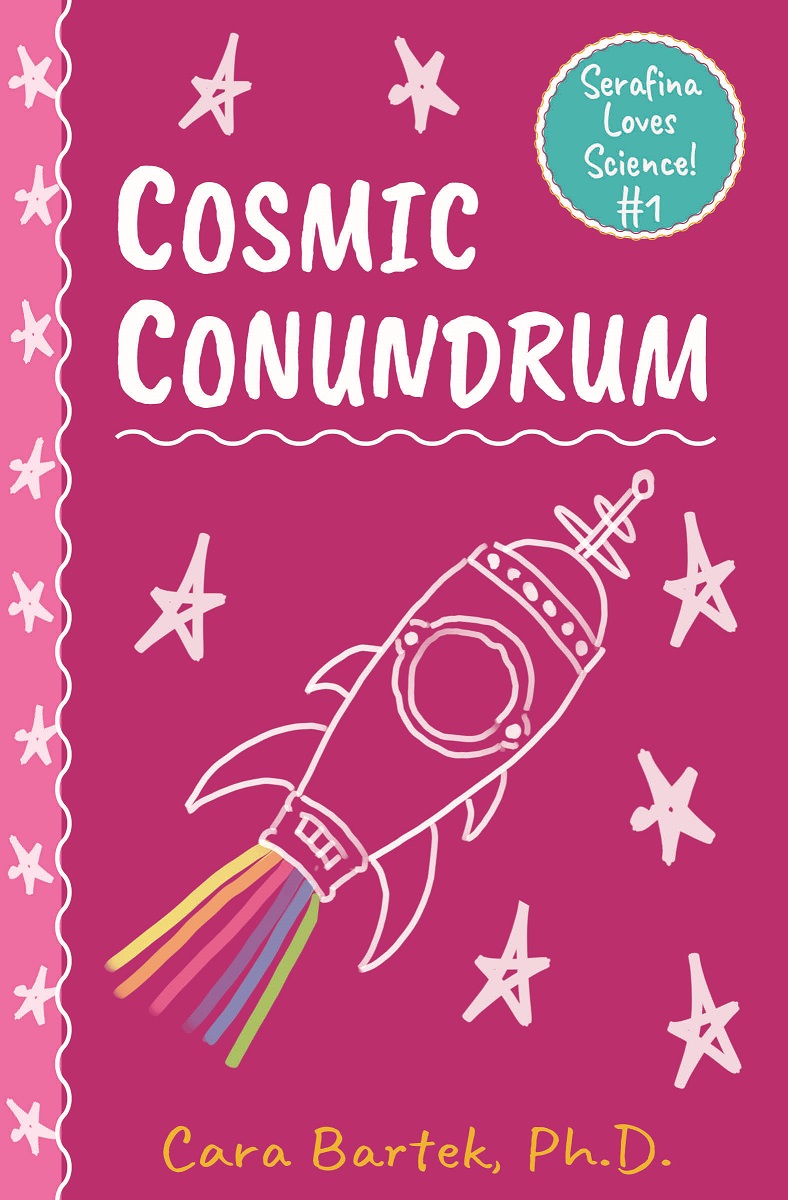 In Cosmic Conundrum, sixth grader Serafina Sterling finds herself accepted into the Ivy League of space adventures for commercial astronauts, where she’ll study with Jeronimo Musgrave, a famous and flamboyant scientist who brought jet-engine minivans to the suburbs. Unfortunately, Serafina also meets Ida Hammer, a 12-year-old superstar of science who has her own theorem, a Nobel-Prize-winning mother, impeccable fashion sense—and a million social media followers. Basically, she’s everything Serafina’s not. Or so Serafina thinks.

Even in an anti-gravity chamber, Serafina realizes surviving junior astronaut training will take more than just a thorough understanding of Newton’s Laws. She’ll have to conquer her fear of public speaking, stick to the rules, and overcome the antics of Ida. How will Serafina survive this cosmic conundrum?

BOOK ONE of the Serafina Loves Science! series

Buy Indie!
Buy from Amazon
Buy from B&N
Buy from kobo
Buy from iBooks
Buy from ALP!
“Every opportunity for inquiring girls to stretch their STEM skills and reach for new horizons is time well spent. The unique characteristics of the exceptional in-between-agers portrayed in Serafina Loves Science will certainly strike a chord with the readers, and Serafina’s adventures are sure to inspire new ideas and open new pathways of creativity.”
Rick Varner

“Cosmic Conundrum is a book for all ages, a timeless story about humanity and kindness with a technological twist of events. Fascination with science and space exploration leads Serafina, a precocious thinker and oblivious-to-girlie-things 11-year-old,  to a space adventure camp. Will she make friends? Will she win the top prize for her invention? Will she be chosen to be a junior astronaut? Mixed emotions surge when the unexpected happens to Serafina.”

Business consultant, executive coach, a parent, and a community leader

“Through the quirky character of Serafina, Cosmic Conundrum shows us that science can be fascinating! Girls, you can embrace your curiosity, follow your passions, and most importantly, just be you! As an environmental scientist, I love this series!”

“This book is fabulous! It made me laugh out loud a few times. My niece Sadie said she loves that Sera has GRIT! This is a true example of how we can let bullying define us or inspire us. I also loved that it makes science fun! I cannot wait for the sequel!”

“Cosmic Conundrum is an excellent book for all students. It is about Serafina’s love of science and her adventures in pursuing her dream. The book is full of science information from the perspective of a young girl and also addresses several issues common to our youth, including friendship, loyalty, facing one’s fears, pursuing one’s dreams, and dealing with bullies. I highly recommend this book for young readers, especially girls. Cosmic Conundrum is an exciting and entertaining story that will give girls confidence to pursue science careers.”
Miguel Sepulveda